Connecting every patient to the right therapy for their cancer, the first time, every time.

Connecting every patient to the right therapy for their cancer, the first time, every time.

Figure 1. CRC By the Numbers

Below, we take a closer look at:

Metastasis from the colon or rectum commonly occurs in the liver, but may also happen in the lungs, bones, brain, or spinal cord.3 Median overall survival (OS) has doubled over the past two decades due to improvements in early detection and treatment of metastatic disease, the efficacy of systemic therapies, biomarker-based patient selection, and promising new data regarding targeted treatments like sotorasib and adagrasib.4 Tragically, once diagnosed with mCRC, median OS is only about thirty months and continued development of more effective treatments is required to improve clinical outcomes and prolong patients’ lives.4

Other somewhat successful therapies include the PD-1 inhibitors, pembrolizumab and nivolumab, and the BRAF inhibitor, vemurafenib. Unfortunately, many of these therapies run into efficacy problems due to the genetically heterogeneous population of mCRC cancers. Anti-angiogenesis drugs are ineffective in mCRC patients with KRAS mutations, and BRAF inhibitors fail against patients with BRAF mutations, two populations that do not typically overlap.4,6,7 Likewise, BRAF and PD-1 inhibitors are generally only effective against patients with deficient mismatch repair (dMMR) CRC, which is only about 5% of mCRC patients.5

In vivo animal models can provide invaluable insights by mimicking clinical characteristics seen in humans, such as disease etiology, progression, metastases, and critically, responses to preclinical drug candidates. However, bridging the physiological gap between common animal models (i.e., mice), humans, and cancer has not been easy. For more than fifty years, researchers have tested and refined many in vivo colorectal cancer models, and in those years, some critical features have been established.

Furthermore, to be of use to drug developers, preclinical models need to provide these benefits while minimizing costs and time-to-result, while maximizing throughput.

The Array of Available Mouse Models for mCRC

Mouse models initiate cancerous growth within the organism via one of three general methods: induction via  exposure to carcinogens, genetic engineering, or transplant of cancerous cells or tissue section. And to varying  degrees, they meet the clinical relevance, cost, and throughput requirements of drug developers listed above. Let’s take a look at each colorectal cancer model type to get a better sense of the advantages and drawbacks of using each.

With CIMs, mice are exposed to chemicals that cause tumorigenesis (i.e., the initial formation of a tumor in the body). Exposure can be implemented with direct application to an organ, injection into the peritoneal cavity, or administration with the mouse's diet. Azoxymethane (AOM) and methylazoxymethyl acetate are common carcinogens used for carcinogenesis and are typically administered with intraperitoneal injection. These agents are metabolized to methylazoxyformaldehyde which can alkylate guanine and thymine, and typically induce tumor growth in the small intestine.9,10 Other agents used include N-methyl-N-nitrosourea (MNU), which induces intestinal tumorigenesis via direct rectal application or ingestion.11

Administration via ingestion has served to model dietary influences on the development of colorectal cancer and progression to mCRC. For example, consumption of 2-amino-1-methyl-6-phenylimidazo[4,5-b]pyridine (PhIP), produced by cooking meat and fish at high temperatures, has been found to induce colitis and adenocarcinomas in mouse models.12,13 Along with diet, CIMs can model the effects of chronic inflammatory bowel disease. Dextran sodium sulfate (DSS), typically administered in drinking water, damages the colonic epithelium, leading to chronic inflammation, and DSS is often combined with other agents (i.e., AOM), to study colitis-induced cancer.8 Finally, different CIMs lead to distinct mutational profiles: the AOM model leads to KRAS mutagenesis, but no APC or P53 mutations, whereas, PhIP and MNU models induce APC mutations, but not P53 or KRAS mutations.8 Overall, CIMs have been useful in the early study of colorectal cancer, yet have little clinical relevance for modeling mCRC.

The earliest GEMMs of colorectal cancer created were found using the MNU model described above. The mouse model, known as APCMin, effectively develops intestinal neoplasia, but suffers from poor mortality due to the development of intestinal obstruction with aging, and rarely survives long enough to develop mCRC.17 The combination of APC mutant lines with carcinogenic agents (i.e., AOM), can speed up tumorigenesis to achieve metastasis.18 Likewise, the use of the C57A/J over the C57BL/6 as the background for APCMin increases invasiveness and leads to carcinogenesis within the colon.19

Germline mutations tend to cause tumor growth in off-target organs as well as within the digestive tract, which has limited clinical relevance to human mCRC. Thus, conditional activation of oncogenes or knock-out of tumor suppressors using the Cre-loxP system has been particularly useful, especially when Cre expression is controlled by tissue-specific promoters.8 For example, Villin-Cre mice exhibit Cre expression within the epithelial cells of the whole intestine, whereas Fabpl-Cre mice express Cre in the distal small intestine, cecum, and colon and both have been useful in modeling some aspects of colorectal cancer.

Such methods have led to the generation of many different GEMMs with varying tissue specificity, metastatic potential, and progression. These models have served as a useful platform for studying the role of APC, KRAS, and P53 in colorectal cancer; however, only a handful of the nearly one hundred different GEMMs mimic the clinical characteristics of metastasis.8

Subcutaneous engraftment into immunodeficient mouse models has a lot of experimental advantages, including easy implantation (i.e., high take rate and surgical procedure), high throughput, and straightforward tumor growth or drug efficacy monitoring.8 This approach can be done using common cell lines, such as HCT116, which can be genetically manipulated to evaluate the role of specific genes or patient-derived tumor cells or tissue from surgical resection or biopsy, which can be more reflective of real-life human tumors.

Yet, for modeling mCRC, these models have significant drawbacks, especially those that use tumor cells lines. Cell lines are (mostly) genetically homogeneous and bear little genetic or phenotypic resemblance to the tumors they are derived from, due to years of passage.22 They also are missing the interaction between tumor and stroma (i.e. connective tissue, blood vessels, and inflammatory cells that are interspersed between the malignant cells and normal host tissues), a critical piece of the tumor microenvironment. In addition, mCRC models have been developed through intravenous injection of cell suspensions, but these accomplish little relevance to the clinic and don’t mimic any of the early metastatic cascade seen in CRC.23

Another approach that overcomes the issues with using cell lines, is the use of patient-derived tumor samples for subcutaneous xenografts (subcutaneous PDX). The Rostock University Medical Center’s single-center, 11-year study successfully integrated biobanking and tumor model establishment of human colorectal carcinoma (both patient-derived in vitro and matched in vivo models). The Hansestadt Rostock colorectal cancer collection reflects the genetic heterogeneity found in the CRC patient population and provides excellent tools for preclinical research.24 Many studies have also confirmed that these models act as superb models for predicting clinical treatment responses and can be used to direct clinical decisions.25 One study by Bertotti et al. also demonstrated that implantation of liver metastases using a subcutaneous PDX model closely resembled clinical treatment response to cetuximab.26

These results are promising, though there remains some dispute over the utility of this system. Take rates differ between protocols, and there is conflicting data about clinical and molecular correlations with model establishment. Some groups suggest that PDX models are only established with more aggressive tumor types, yet others don’t.8

Figure 3. O-PDX models capture many characteristics of tumors in the clinic and combine it with the physiological relevance of orthotopic (which means “the correct place”) implantation.

The most popular implantation site is the cecum, and it’s frequently used, though there are some critiques about the methodology and other protocols that involve subserosal or submucosal implantation have been developed.27,28 While O-PDX does require a high degree of surgical skill for implantation, it has been shown to capture the invasiveness, critical tumor microenvironmental features such as morphology, genetic heterogeneity, and transcriptional profile, and robust ability to model metastasis and end stages of mCRC in a short period of time.29-33 The ability to model metastasis is a major advantage of O-PDX over subcutaneous PDX models and several studies had shown that O-PDX models also mimic pharmacological responses seen in the clinic.8,32,33 Transduction of PDX samples with reporter genes such as GFP or luciferase, has further facilitated the preclinical and clinical utility of O-PDX, as tracking tumor growth or metastasis is often challenging with these models.

Despite these promising results, cost and low tumor take rate have significantly limited the more widespread adoption of O-PDX for large-scale preclinical screening and “co-clinical” trials.

At Certis, we’re committed to improving the translation of mCRC therapies by facilitating clinically accurate preclinical research through the use of PDX mouse models. We’re continually adding to our well-characterized bank of CRC tumors that include primary and metastatic colorectal adenocarcinoma models, some with matched cell lines, that capture the breadth and heterogeneity found in colorectal cancer. 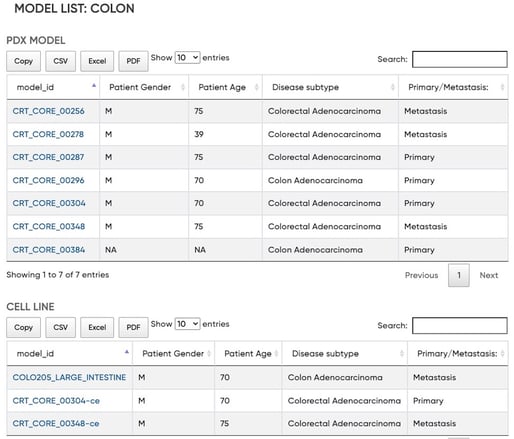 By outsourcing PDX model development and other preclinical assays to us, we can reduce your time-to-result and provide access to actionable data, enabling you to make better preclinical decisions. Register for access to our searchable tumor database now. For more information, email us at busdev@certisoncology.com.

Elie Diner has a PhD in bioengineering and 12 years of research experience in microbiology, synthetic biology and immunology. During his time at the bench, he developed a passion for effective science communication and eventually transitioned into a career as a professional science and content writer. He's authored 12 peer-reviewed scientific publications and numerous blogs, whitepapers, and eBooks for life science companies.